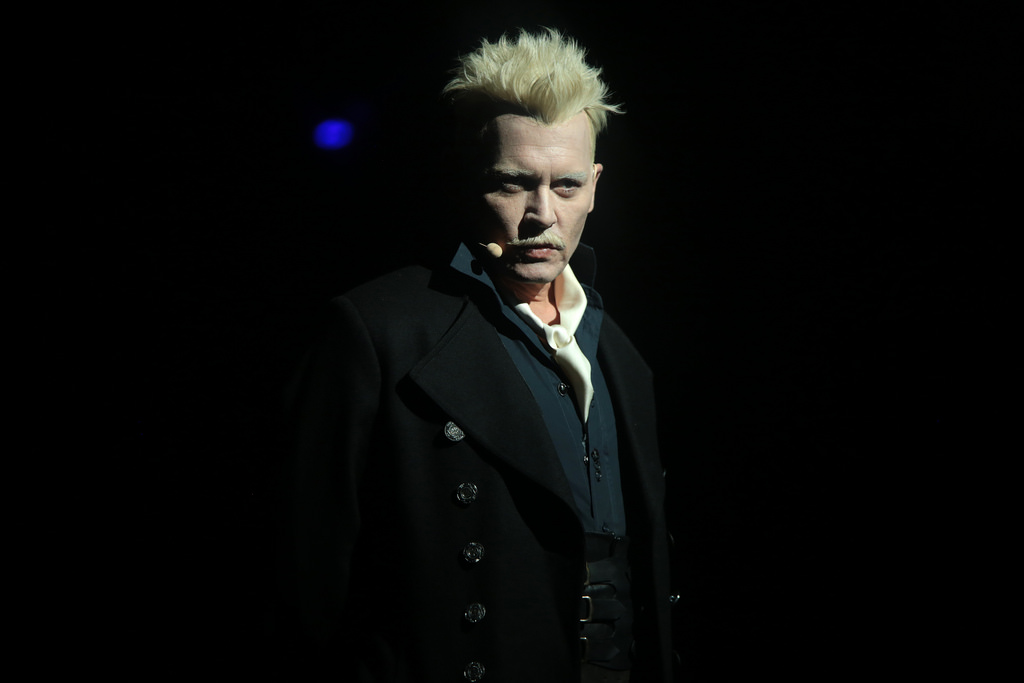 Harry Potter, both books and movies had a massive influence on me when I was a child, while definitely flawed I would still call them a great series of books and movies and recommend them to any older children. I still have a great passion for this universe and I would call myself a “Harry Potter fan”. But as any successful franchise, Harry Potter has encountered the same problem as so many that came before him, a problem of “What to do next?”, your franchise has ended there are no other books, the main storyline is over and our heroes move on. The real question of “What to do next?” isn’t really to the authors, but rather to the movie producers these franchises after all make a lot of money, they are recognizable and their fandom is massive. As a result, we as viewers are receiving movies like Star Wars Prequels and Sequels, Hobbit trilogy, Prometheus and Alien Covenant and in case of Game of Thrones a prequel set during Long Night (what a great idea). Harry Potter franchise ended with Deadly Hallows Part II in 2011, but with Fantastic Beasts and Where to Find Them the franchise was brought back in 2016, which is a completely forgettable and harmless children movie. Early on November 2018 Fantastic Beasts: The Crimes of Grindelwald was released, a sequel to the first Fantastic Beasts movie and I watched it. And this is what I think about the movie.

The movie is set immediately after the first movie and Gellert Grindelwald (Johnny Depp) is being transported by MAGUSA to London to be tried for his crimes, but with help of his infiltrated agents he escapes. Three months later Newt Scamander (Eddie Redmayne) is contacted by Albus Dumbledore (Jude Law) to find Credence Barebone (Ezra Miller), who somehow survived the events of the first movie. I would like to start with some positives, because there are quite few things this movie does decently. Fantastic Beasts: The Crimes of Grindelwald is once again directed by David Yates, who directed every Wizarding World movie since Harry Potter and the Order of the Phoenix, so he is someone who knows how movies set in this universe should look and I would consider him to be perfect director for Wizarding Word movies. The movie has a 200-million-dollar budget, so there are great creature designs, costumes and locations. CGI in this movie is once again fantastic. New actors are well casted and fit the characters they are portraying, probably the best addition to the cast is Jude Law as young Albus Dumbledore. There was always a discussion over, which Wizarding World movie is the worst and Fantastic Beasts: The Crimes of Grindelwald kinda killed the discussion, because this movie is an absolute trainwreck and here I try my very best to explain why.

Reasons of its failure

Grindelwald is wrongly portrayed and played

Johnny Depp as Gellert Grindelwald was in my opinion always a bizarre decision, why not saying that Johnny Depp is a bad actor, his casting was always weird to me even when first official pictures were revealed. I tried to give him a chance, before watching a movie, but after watching it I can’t remember a single thing about his character, Gellert Grindelwald should be a fascinating and intriguing character, his connection to Albus Dumbledore and that they both shared the same extremist ideology. Most frustrating thing about all this is how bland and boring Johnny Depp performance was, Ralph Fiennes as Lord Voldemort was such a great villain treating, dangerous and most importantly when he was in a scene you wouldn’t know what could happen next (unless you read the books). Johnny Depp just looked bored and uninterested. There was a scene where this could be partly fixed, a scene where Grindelwald’s associates and him break into the house and kill two people to find out that there is also a little baby in a building, so one of Grindelwald’s associates kills that baby. I would prefer so much if Grindelwald actually killed that baby by himself, let him use Avada Kedavra (killing curse) and frame it similarly as the scene when Voldemort points his wand at young Harry in Harry Potter and the Sorcerer’s Stone. That in my opinion would be perfect a bit of fan service, because more observant fans would recognize it also we would actually see what could potentially happen to Harry, if the killing curse worked. One last thing, before I move on to the next problem, the movie is called Fantastic Beasts: The Crimes of Grindelwald, but we are not present to see him do any crimes, he doesn’t directly kill anybody and he doesn’t anything that malicious.

When it comes to fan service, I am kinda in the middle, I appreciate a subtle and good fan service and there is inherently wrong fan service many directors actually use fan service for example Lars von Trier’s movie The House That Jack Built includes a lot of scenes from his previous movies (Melancholia, Nymphomaniac and Antichrist), so the claim that fan service is just a mainstream element is not correct. Quentin Tarantino uses a lot of references to his previous movies or movies he likes. On the other hand it’s the most obnoxious thing imaginable and Fantastic Beasts: The Crimes of Grindelwald puts the obnoxious element to embarrassing, with exception of the return to Hogwarts and using the classic Harry Potter theme, everything else is just pointless. Do you want to know how to indirectly insult your fans? Ok here it is, there are multiple scenes that show Nicolas Flamel (Brontis Jodorowsky) and then show Philosopher’s Stone, I know who the guy is he introduced himself, there is no need to show the Philosopher’s Stone, why did you do this? Without that Stone I would thought he was Voldemort’s uncle, thanks a lot Stone. The scenes in Hogwarts is one of the best scene in the whole movie, but during one of the flashback scene suddenly and out of nowhere comes Professor Minerva Mcgonagall (in this movie she is played by Fiona Glascott), how is this possible? According to multiple sources Minerva Mcgonagall was born on 4th October 1935, this movie is set in year 1927 and if you think that might be her mother or other relative, Fiona Glascott is credited as Minerva Mcgonagall (or as young Minerva Mcgonagall) on multiple sites so the only explanation is once again fan service you know she is only other recognizable professor at Hogwarts besides Severus Snape. So we have pointless cameo from this character. Why not anyone else like Armando Dippet or better create a new character that would have an importance in the future installments? But why do that our fans and viewers are just idiots they need clear and easy references to digest. This could go on and on, Albus Dumbledore is now teaching Defence Against the Dark Arts, Nagini is now a woman (and I have no idea why). Fantastic Beasts: The Crimes of Grindelwald is just filled with lazy references.

Ending of Fantastic Beasts: The Crimes of Grindelwald is quite possibly the biggest crime against Wizarding World since Harry Potter and The Cursed Child, I haven’t seen something so lazy and poorly written in a while, so lets get started. Credence Barebone (Ezra Miller) is searching for his family, but a man called Yusuf Kama (William Nadylam) is also trying to find him because he suspects that he his a son of Corvus Lestrange a man who put Imperius Curse on his mother and she is also mother of Leta Lestrange (Zoë Kravitz). Yusuf Kama is under Unbreakable Vow from his father to kill one person Corvus Lestrange actually loves, which is his son. Leta Lestrange reveal that her half-brother is dead. In this scene where two characters (Yufus and Leta) are yapping and monologing, which feels like twenty minutes and other characters are listening, we learned nothing. We still don’t know who Credence is. So finally in the end of the movie Grindelwald (Johnny Depp) reveals a great secret, that Credence actually is Aurelius Dumbledore, apparently much younger brother of Albus, Ariana and Aberforth. To symbolize that he actually is a member of Dumbledore family a phoenix appears, because phoenix is associate with Dumbledore family members and he is powerful enough to defeat Albus.

I have no idea who Credence Barebone/Aurelius Dumbledore is, when it comes to relation to Albus Dumbledore, my best guess is that he is his cousin, but I don’t know for sure. If he is a brother to Albus, it makes no sense because by the time of his birth 1901 both Percival Dumbledore and Kendra Dumbledore were dead. The real reason why I hate this ending, is because it’s the same old “This time it’s really personal” cliché, like isn’t the whole Albus Dumbledore vs Gellert Grindelwald personal enough? No viewers wouldn’t understand it, it must be within family, family issues = real drama.

Fantastic Beasts: The Crimes of Grindelwald is quite possibly one of the worst movies of 2018, while its technically fine and acting is quite good. The way this movie treats its audience (which are mostly fans) is absolutely shameful and disgraceful. J.K. Rowling should be ashamed for this. This is something of a miracle movie that has so many references for the fans, but also insulted them. I give this movie a 2/10 rating.

P.S. In case you are wondering, why I barely mentioned main protagonist it’s because he doesn’t do anything worth mentioning.

Until than keep watching Harry Potter and the Prisoner of Azkaban!